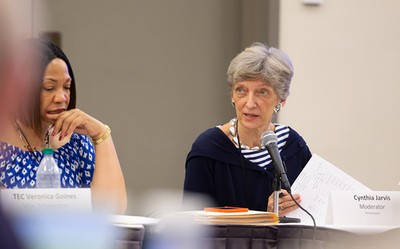 Veronica Goines, vice-moderator, and Cynthia Jarvis, moderator, of the Assembly Committee on the Way Forward. —Photo by: Michael Whitman

Click here to read the article by the General Assembly News Coverage.

The General Assembly Committee on the Way Forward is moderated by our own Rev. Cynthia Jarvis (Chestnut Hill).

Tweets by @Presby_Phl
Now Is the Time: GA Reflections from Rev. Byungil Kim